We finally got the bus back from the shop after getting the drop box rebuilt, rusted frame sections replaced and repaired, suspension adjusted, and an alignment. That was a long three months of delays, waiting, and finally a finish.

The bus drove well all the way home and once it was there I cranked up the heat inside and Megan started cleaning the bus, packing up the house, and setting up the bus. I had a few more projects to take care of before we could leave, so I got going on those as well.

Did I mention that it was below freezing the whole time? It was, and we had to keep everything warm to keep it from freezing and the fridge/freezer going too.

As for Megan’s packing – think of taking the clothes that five people need for a few months, food that you’ll need, supplies (paper towels, toilet paper, cleaning stuff, pans, silverware, coffee implements, and so on), emptying out the house so we could shut off the fridge there. Don’t forget the cat and what he needs. As for clothes, we had to pack warm winter clothes (jackets, boots, mittens) for part of the trip and then all of the summer clothes (shorts, swim suits, towels). Remember, you can’t take everything since there is very limited storage space. It was like moving and only taking the most important 5% of your stuff.

One of the projects to do was to relubricate the throttle linkage, which is a bunch of small rods and bearings connected to an almost 40′ rod that connects the accerator pedal to the engine in the back. The linkage was binding and wouldn’t release fully. After trying a number of things, but not having access inside the tunnel to lubricate all of the bearings, I decided it was time to put in a pneumatic throttle. I had been collecting parts via eBay over the course of a year so other than a bracket that needed to be fabricated, I had what I needed.

Luckily, my friend Mike came over on Saturday to help out and we reconsidered the strategy. He came up with a better mount for the actuator and went on to make it with the plasma cutter and welder. 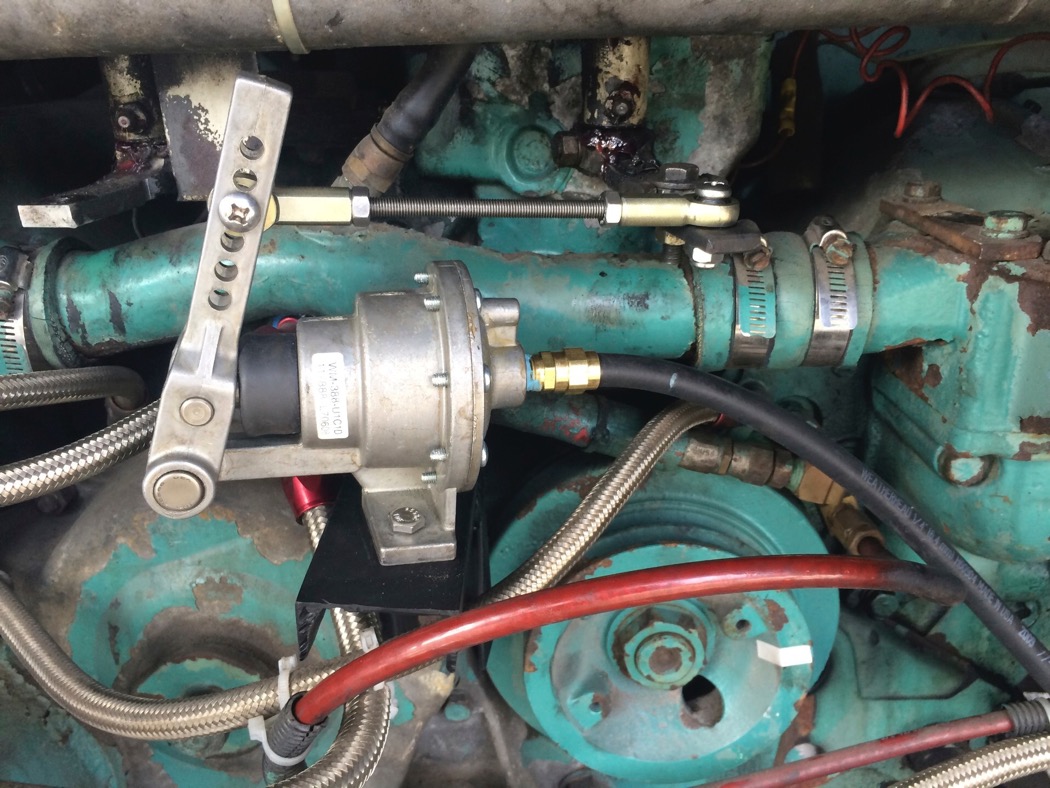 Thanks Mike!! We routed the air hose and mounted the new pedal after some trial and error. 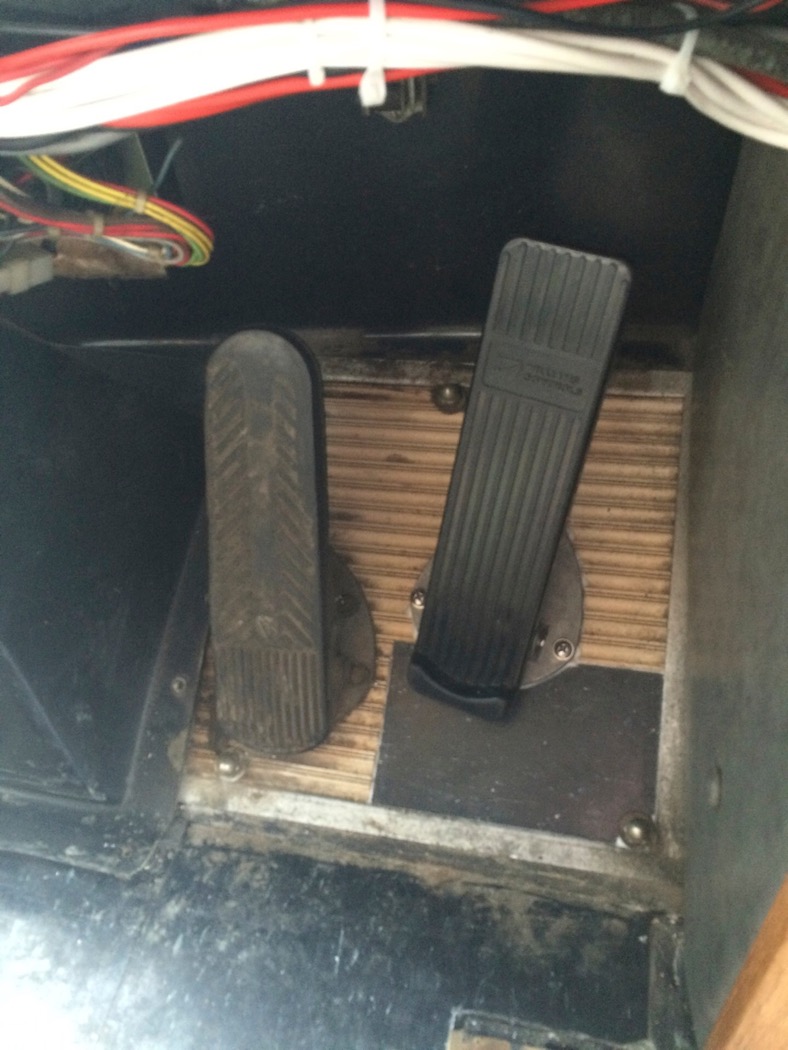 What I hoped would be a few hours turned into a long day and it wasn’t finished yet. The next day I found the old capped off air line that previously fed the air mechanism on the door and used that to feed the pedal. I put in the air modulator on the transmission too.

Ready to get going on the trip I started the bus, put it in gear, and the engine stopped. Over and over again. No bueno.

I went over everything that I had changed and figured it had to either be the cold or something with the transmission modulator. I pulled the modulator off – and the pin was missing. Which meant I had dropped the pin inside the transmission. Ugh! Not knowing if I could leave the pin in there and just get another one, I called the local Allison dealer – they didn’t have any techs there who knew the answer on the HT-740D (it’s an older all-mechanical transmission). They also didn’t have any pins in stock, but they did have the pan gasket. So, with worse weather on the horizon that could delay our trip further if we didn’t leave soon, I decided that I would drain the transmission, drop the pan, fish out the pin, and put it all back together.

Long story short, I picked up the gasket at the dealer that night and started work early the next morning in the drieway. 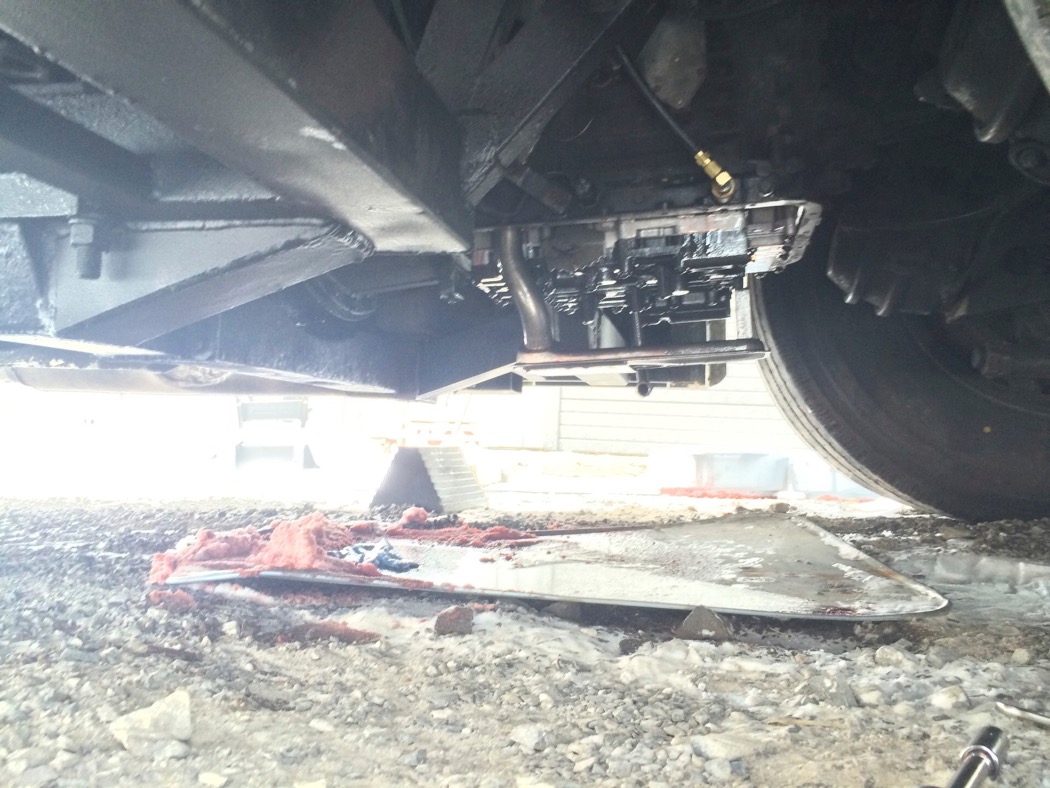 It was bitter cold with the wind chill at -4F. I found the pin, got the pan back on, and filled it back up – the later of which took a few hours because as cold as it was, it didn’t flow quickly. I successfully overfilled the transmission a bit, so I had to drain a little off too. Oops. Enough drama already!

On Monday, when the bus wouldn’t start, Megan took the kids to her parents house. Having moved all of our stuff into the bus and having cleaned out and closed up the house, they needed a place to stay. Megan’s parents took them right in, setting up extra beds, providing toiletries, and feeding them very well. The kids were disappointed to not be leaving on the trip, but getting to stay a couple nights at Nana and Bopa’s house was a fun way to start our adventure!

1 thought on “The bus is back! (and other last minute projects)”