I had set my alarm for 6:30am to start the generator knowing that we would likely need to preheat the main engine for at least a couple of hours before it would start. I woke up and noticed that both heaters were blowing cold air. We had run through the entire backup tank of propane in a single night with it being so cold.

I started getting ready for the day and couldn’t get the water pump to run.

I investigated and found that the pump and supply line had frozen overnight from the cold. I put an extra heater into the water bay to defrost the pipes and went back inside. Then the generator stopped running. Knowing now that the bus engine wasn’t going to get any warmer without the generator running, I tried staring it and despite the morning’s rash of “luck” the engine started right up. Checking the gauges I noticed that the fuel gauge said empty.

The fuel gauge hasn’t been trustworthy anyway, but I wasn’t expecting it to read empty. Now I’m thinking to myself that the generator quit because there isn’t enough fuel in the tank (the generator fuel pickup is at the 25% point of the tank, so running the generator won’t ever run the tank completely dry) and maybe there wasn’t enough to get us very far either. My thinking at the time was that we either used far more fuel that we expected yesterday, there was a leak, or someone had siphoned off fuel while we slept.

In any case, we needed to get filled up! I called to Megan to put everything away that would fall over as we drove across the parking lot and we made a quick trip to the diesel pumps at a station next to Walmart. We made it! I was very surprised when I only added 30 or so gallons of fuel, but the good news is that meant we didn’t have a leak and no-one had siphoned off any fuel; so much for conspiracy theories.

With the generator not starting and not having any propane we couldn’t get any more heat inside, so we decided we would go back to the car and Megan would follow me to a propane distributor and we would get the tanks filled. We made it there, a little out of our intended path for the day, but were pleasantly surprised by the much lower cost of propane compared to New York. The folks at Beco Propane took care of us quickly and let us spend a few minutes in their parking lot to get the car connected. 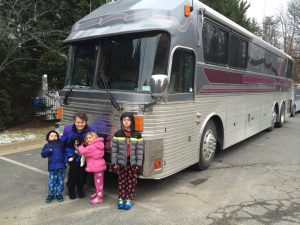 We got back on the road and Megan started checking on the weather forecast for our planned stop in Lake Fairfax Park in northern Virginia. We decided that with more cold weather coming, freezing rain and ice forecast for the next morning, and a broken generator that we were better off making a short stop in Vienna to see family and then getting further south to another campground. We called Mom and changed our plans (again) and left a message for my brother. The nearby hotel let us park in their back parking lot and we had a too-brief visit with Mom over lunch. 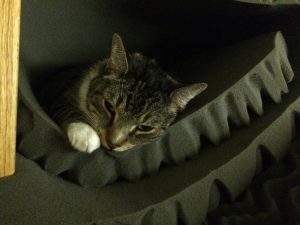 We battled crazy drivers on the Capitol Beltway and figured how far we wanted to drive before calling it a night. We wanted to find a campground that wasn’t too far from I-95 since it was going to be a quick one-night stop and then leaving again in the morning. We spent the night at Americamps RV Resort outside of Richmond, VA. It was good to stop and walk around with the kids without wearing a heavy winter coat! With freezing weather forecast in the near future we planned on staying just one night here before continuing further south.

2 thoughts on “Complications, a visit, and last minute change of plans”