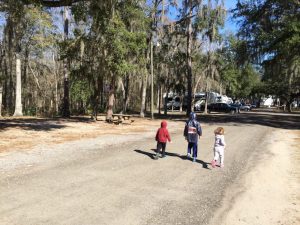 We left Americamps RV Resort with the idea that we’d stop in South Carolina for another night, then drive a few hours and stop overnight just north of Jacksonville, FL before getting to the first long-term stay of the trip. While driving we discussed the plans and, as we frequently do, changed them based on how we were feeling and how the drive was going. So we stopped to grab some warm dinner to go and I called the campground we wanted to go to – Savannah Oaks RV Resort. By going further that day to Savannah meant staying there for two nights and giving all of us a rest day from driving. 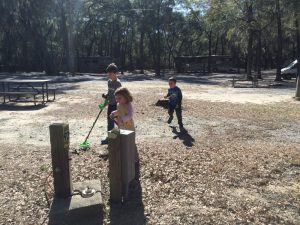 I made the reservation and the woman was very nice on the phone. The GPS said we would get there at 10:15pm and the office there closed at 10. She said that the owner would wait up for us until 10:15, but no later. We made good time and arrived with a few minutes to spare. Getting around the treed campground at night with the bus towing the car was tricky, but we made it without scratching anything or having to back up. Phew! 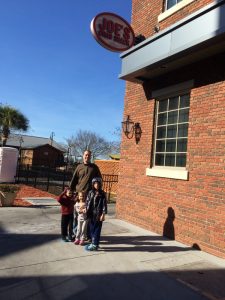 The kids tried out their new metal detector around the campground in search of treasures and played on the playground for a little bit. On a recommendation we went down to River Street in Savannah and drove down the entire length of the very busy street, gawking at the shops and avoiding pedestrians, and finally found somewhere to park. We had a fantastic lunch at Joe’s Crab Shack on the waterfront followed by a lot of walking to enjoy the sights and shops.

We stopped into the famous Savannah’s Candy Kitchen and watched the REAL candy man make taffy and throw samples out to all of the kids who came by to watch.

The kids enjoyed watching the freighters go up and down the river and they were in awe of the containers that rose above the deck and didn’t fall off. 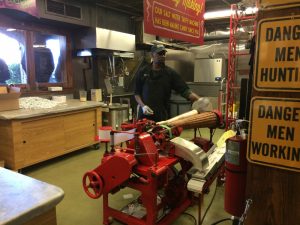 We got into a conversation with a street musician and sat down to listen to him sing a few songs. Cake danced to his music and then drew up the courage to put some money into his bucket.

The final stop on the street was in a nut shop where we sampled many different nuts roasted and seasoned every way you can imagine (and a whole lot that I hadn’t before!). The kids all loved tasting and comparing them. 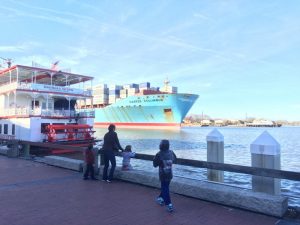 Ships on the Savannah River 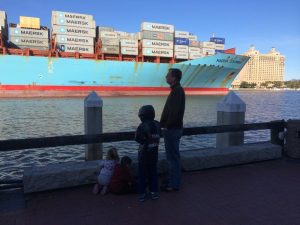 Watching the container ship float by 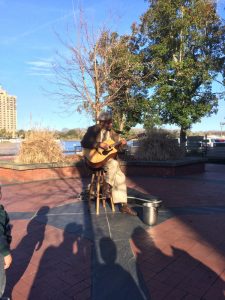 1 thought on “Georgia On My Mind”