Our first day in New Orleans, we couldn’t wait to get to the city and find Cafe du Monde…the one place we were repeatedly told we must go to! We were staying on the opposite side of the Mississippi River and had heard it was fun to take the ferry over, so we headed to Algiers Point to hop on. 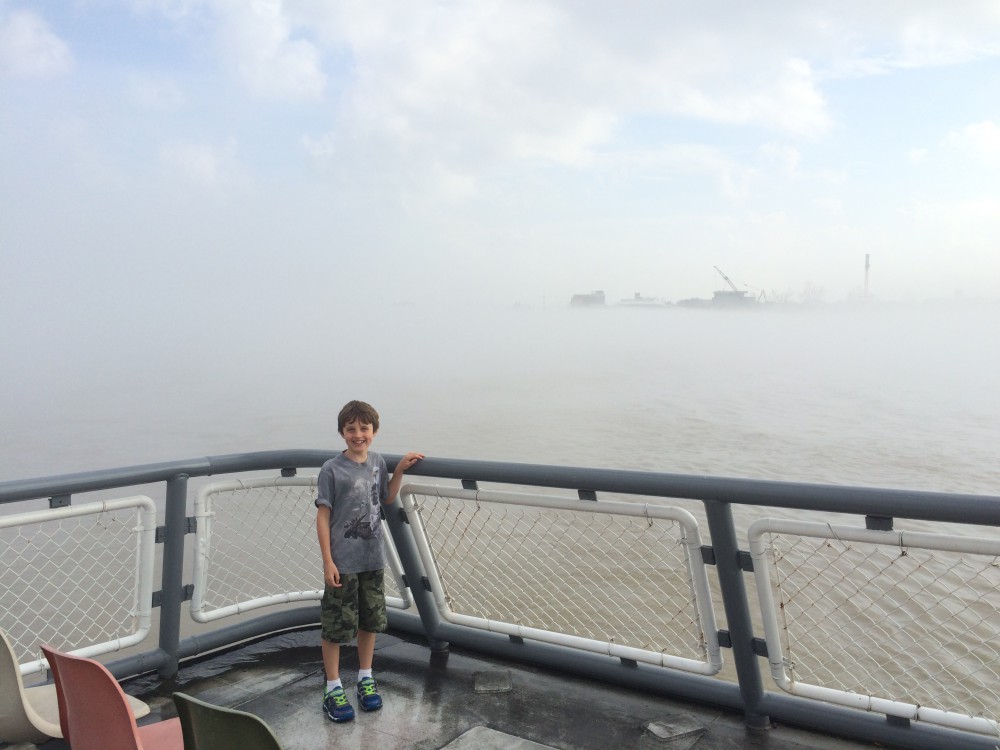 It was a foggy day which added to the excitement for the kids as we made the quick trip across the river. Super cool experience for everyone! You know what wasn’t super cool? In fact, not even a little cool? When, at the end of a long day walking around the city with three little kids, you go to get back on the ferry and it’s closed for fog. Apparently there is some magical amount of fog that shuts the ferry down. We decided to go get some dinner in hopes that the fog would lift and we could get back on the ferry. That was not in the stars. We came back outside.

It was dark, rainy, and foggy, and our car was on the other side of the river! We were told that the street car driver could get us to the right bus and the bus would take us over the river to Algiers Point. No one seemed too sure where to send us and at one point we had gotten on a bus, then were told we needed the bus in front of us, hustled onto that one, which was wrong, then raced back to the first one which did get us over the river. It was late, dark, rainy, the kids were exhausted, and let’s just say this mama was not a happy camper! Cake was completely unfazed with her surroundings and, in her usual way, struck up a conversation with everyone within earshot. At the end of the bus ride we walked about 4 blocks to our car. Have I mentioned that I have a tendency towards worrying and sometimes get a potty mouth when I’m very stressed? I think Kitt has finally learned that moments like that are not the time to comment on my language. It was very stressful and uncomfortable, but we figured it out and made it back safely. Lesson learned: never take the ferry on a foggy day!

4 thoughts on “The ferry incident”