In typical fashion, we debated over the timing of seeing Joshua Tree National Park, which route to take, whether or not we would dry camp on Bureau of Land Management (BLM) land vs a campground, and so on. Thinking back to a chat I had with a friend of mine a week or so before, I decided that a little detour to Lake Havasu City would be a nice diversion, but not until after I made sure that spring break, which attracts 50,000 visitors to the city, was completely done!

It was an easy drive to the Lake Havasu State Park campground despite a delay from road construction on US-95 into town. We arrived at the campground without a reservation, but being early in the season we were given a map of the sites that were available so that we could pick and choose and then return to the ranger station to officially check in. We drove around a bit and found a great spot with views of the water right from the bus. Megan was in heaven! We took a walk down to the beach where the kids ran right into the water. 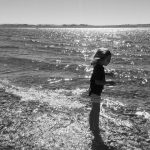 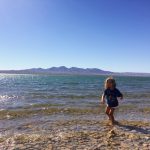 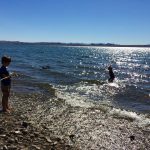 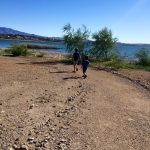 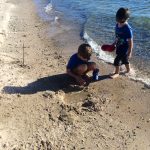 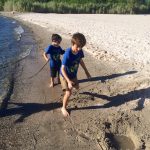 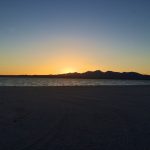 The next day we started out with a walk to the larger beach, but found foam and algae on the lakeshore, likely from it being a warm day already and without the wind like the day before. We walked to another beach in the park that was better and everyone got in! After a nice dip in the water we went off in search of the London Bridge.

We stopped at the visitor center first and learned more about Lake Havasu City. Did you know that there are twenty-four lighthouses that were built around Lake Havasu for nighttime boat navigation, and that all of them are 1/3 size replicas of famous east coast, west coast, and great lakes lighthouses? As for the bridge, Robert P. McCulloch, CEO of McCulloch chainsaws and city founder, was looking for a unique attraction to bring people to the city. He learned that the City of London was selling the sinking London Bridge and then successfully bid almost $2.5 million for it in 1968. He had the bridge taken apart, every stone meticulously labeled and documented, had an earthquake-proof bridge foundation and structure designed and built in Lake Havasu City, and then the outer stones for the facade were all put back in place. Easy, right? Oh, and since you need some water to go under a big famous bridge, he then had a channel dredged to make the peninsula, Pittsburg Point, into an island. In what is essentially the desert. Crazy! It was pretty cool to think of the history of the bridge, what it took to ship it there, and to see it in person. We sang London Bridge is falling down… over and over again, and now knowing the full story the song made total sense!

We finished the day with a good dinner at a mexican restaurant in town, and then Dooder and I got haircuts at Sports Clips since they were open late. Dooder had a great time and made the staff laugh non-stop. 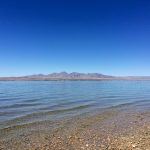 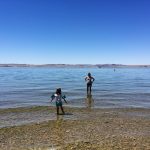 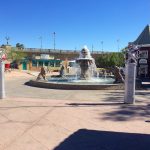 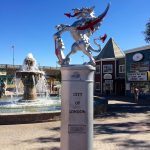 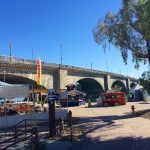 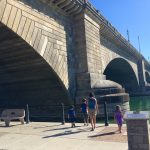 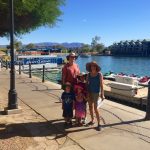 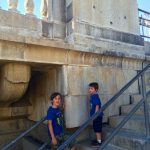 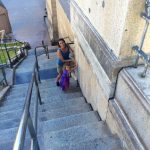 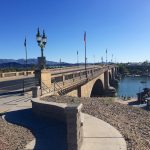 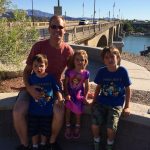 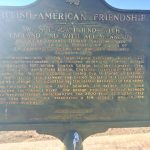 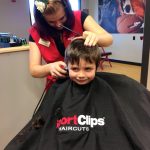 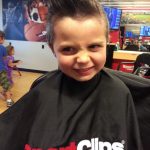 On our way out of the state park we stopped in at the ranger station so that Yay-yay could turn in his Junior Ranger workbook. The ranger reviewed his work and quizzed him a bit on what he had learned before taking the oath.

It was a fun stop and great to play in the water for a couple of days, but with the desert getting hotter and Lake Havasu City forecast to be 102 the next day, we decided it was time to get moving. In the summer the high temperature is frequently between 110 and 120 degrees. Way too hot for me.

We made another last minute detour to meet, in person, a friend that I knew from the bus conversion forums and Facebook pages. Cliff is well known not only for his knowledge of buses and old Detroit two-stroke engines, but also his hospitality and generosity. He had contacted me and said he wasn’t far from Lake Havasu City, and we knew that we had to take the opportunity to visit since we were so close! Cliff and his wife Sonja were very welcoming and they showed us around their property a bit, introduced the kids to the recent litter of kittens, and gave us a tour of their latest MCI bus conversion. Yay-yay was excited to see an old Eagle model 5 bus in Cliff’s back yard with the original front and rear fiberglass caps on it and to look over the diesel engines that were taken apart in the barn. Cliff shared some more of his knowledge on engine oils (a much discussed and deliberated subject!), how I could better set up the transmission cooling on our bus with a different oil cooler on the engine, and answered a few random questions I had. He showed me a couple of Humvees that he had just bought from the government and what his plans were for them. It was too short of a visit but a great time for all of us to meet. Thanks, Cliff!! 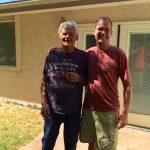 We had a three hour (or so) drive through the desert to Twentynine Palms, CA planned for our next stop to see Joshua Tree National Park. Like many people, after seeing U2’s Joshua Tree album I have always wanted to see a Joshua Tree. The kids were all excited about seeing another national park and earning another junior ranger badge. Off to another adventure!

1 thought on “The London Bridge isn’t in London”