We left the SKP park in Coarsegold a little later than we expected. While winding our way out of the park we ran into some of the friends we had made during our short stay there and stopped for a chat. Certainly some of the better parts of this trip, if I haven’t said it already, are the wonderful people we’ve met and the conversations we’ve had. So then the people and conversations become part of the trip – something we stop or slow down for, destinations and deadlines be damned.

Our original route had us stopping somewhere in Contra Costa County, east of San Francisco, to see a good friend of ours and visit the area. As fate would have it, on the days we would be traveling through the area he was out of town. With that, and the desire to get up to Portland faster, we decided to skip San Francisco this time around and head for the redwoods in northwest California. With all of the planning tools we have, between Google Maps and various campground finding apps on our iPhones, it became evident that the best way to get there was to spend an overnight at a rest stop on US-101 north of Willits rather than going out of our way (and spending money) to stay at a campground.

Our route and timing brought us into the San Francisco area during rush hour, naturally. Just like New Orleans and San Diego previously, who wouldn’t want to be driving a big bus through rush hour traffic while towing a minivan? With our natural ability to time events such as this and our want of excitement on the highway, we did it once again. Only this time we eyed the far left lane: the coveted HOV/carpool lane. I glanced at Megan, said “Whaddya think?” and off we went. We slowly – I say “slowly” because it was stop and go traffic AND no-one wants to let a big bus change lanes in front of them – made our way across traffic and into the HOV lane. Bingo! We had a few more opportunities along I-80/I-580 to use the HOV lane, saving us a bunch of time and fuel. Before you knew it we had to weave our way across four lanes of traffic to exit towards the Richmond-San Rafael Bridge which crosses the San Francisco Bay. We had the “privilege” of paying a whopping $25 toll to cross the bridge, so I figured I should have some photos to remember the experience with: 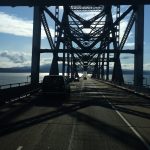 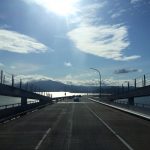 When trip planning we wanted to have a longer drive day to get us closer to Orick, CA where the southernmost visitor center (and ranger station) was for the Redwood National Park. For us to have a successful long day of driving, we needed to stop periodically to let everyone stretch, eat, run around, etc. Timing is everything, so as we drove up US-101 we adjusted our next stop based on how everyone was feeling and behaving. The kids were doing very well, so we pushed for the last Walmart we would see before the park and stopped there in Willits, CA.

We don’t shop at Walmart when we are “home” but for groceries it becomes a stop we can depend on, like Target, Safeway, and other large chain grocery stores, to have what we’re looking for (read: certain organic foods we want, decent vegetable and fruit selection, and not too expensive). Another advantage of stopping at a Target or Walmart is that they generally have a large parking lot that is easy to get in and out of without disconnecting the minivan or backing up.

We had dinner at Subway (GO CARL!), did some shopping for the next four to five days of meals, and got back on the road. We drove up a few exits and stopped at Jensens Truck Stop for fuel, which took a while to get pulled in and in front of the right pumps that had fuel. Off again towards the planned rest stop.

We started to notice that our AT&T cellphone coverage would come and go along US-101. Coverage is never as good as what AT&T states on their web site, and being inside the big tin can faraday cage (aka bus) can make the situation worse. By the time we arrived at the rest area, I would guess we hadn’t had cell service for at least a half-hour.

At the rest area, which wasn’t right next to the road but rather across a small bridge and back down a small roadway, it was quiet and didn’t have any other RVs, semi-trucks, or campers parked in the larger parking area. It was dark when we arrived, but I figured it was a good idea to walk the small, secluded rest area to see what was there. Only a few cars had stopped briefly in the parking circle by the building and the rest area was clean and well taken care of. The posted rules don’t allow “overnight camping” but do allow stopping for a maximum of eight hours – the latter being another reason to have a late arrival, thus not requiring an early morning exit.

Like most people, we are reliant on technology in our daily lives. We depend on our cell phones not only for convenience but also for emergencies. Staying at a fairly secluded rest stop not visible from the main road in the middle of the night without cell service did require me to take a few extra deep breaths, put the crazy thoughts away, and reassure Megan that all was well. Megan has mentioned the challenges in dealing with Dooder’s type 1 diabetes, and in the seventeen months since his diagnosis we had learned a lot about taking care of him and dealing with T1D. With that, we have learned to be self-reliant on a day-to-day basis – a stark contrast to where we were the previous year when we wouldn’t have considered being on a long trip and especially not in this kind of situation: three hours from the nearest children’s hospital and without cell service for at least a half-hour in any direction. Although this was a bit out of our comfort zone, I had checked and verified that the rest area had a working pay phone in case of any overnight emergencies.

I was tired from the previous day of driving, and slept soundly. I don’t recall hearing any highway noise from inside the bus that night, though that could very well have been from the lack of traffic at that hour. Megan and I woke up rested and relished the quiet as the kids hadn’t woken yet. We decided it was worth letting them sleep in, and that overstaying the eight hour limit wouldn’t be a terrible thing. No other vehicles were at the rest stop with us, so we weren’t keeping any other drivers from a needed safety or rest break by taking up a parking spot for too long. After a while it seemed a good time to run the generator to charge the batteries and go outside to prepare the minivan for the day’s drive; if the kids woke up then it wouldn’t be terrible.

As I was outside, a California Highway Patrol Officer drove through the parking lot and upon seeing me made a quick circle around the bus, stopped nearby, and got out. Megan had just looked out the window and noticed what was going on and took a picture. She thought there might be a good story to go along with it. Up until this point everything was going so well, unlike our stop in Pennsylvania at the beginning of the trip, though as much as I try to build up the suspense while writing this recap, our good luck continued. The officer was extremely nice, made it clear that we could stay as long as we needed, and also mentioned that there had been patrols through the rest area all night (I never heard a thing!). We chatted for a bit, as he was genuinely curious about our trip, and he said that he had actually been to Rochester, NY and the Finger Lakes region – what are the chances of that? 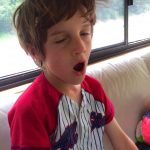 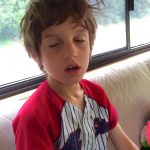 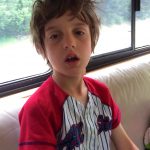 The kids eventually awoke, had breakfast, and we went on our way north, headed towards Redwood National Park! 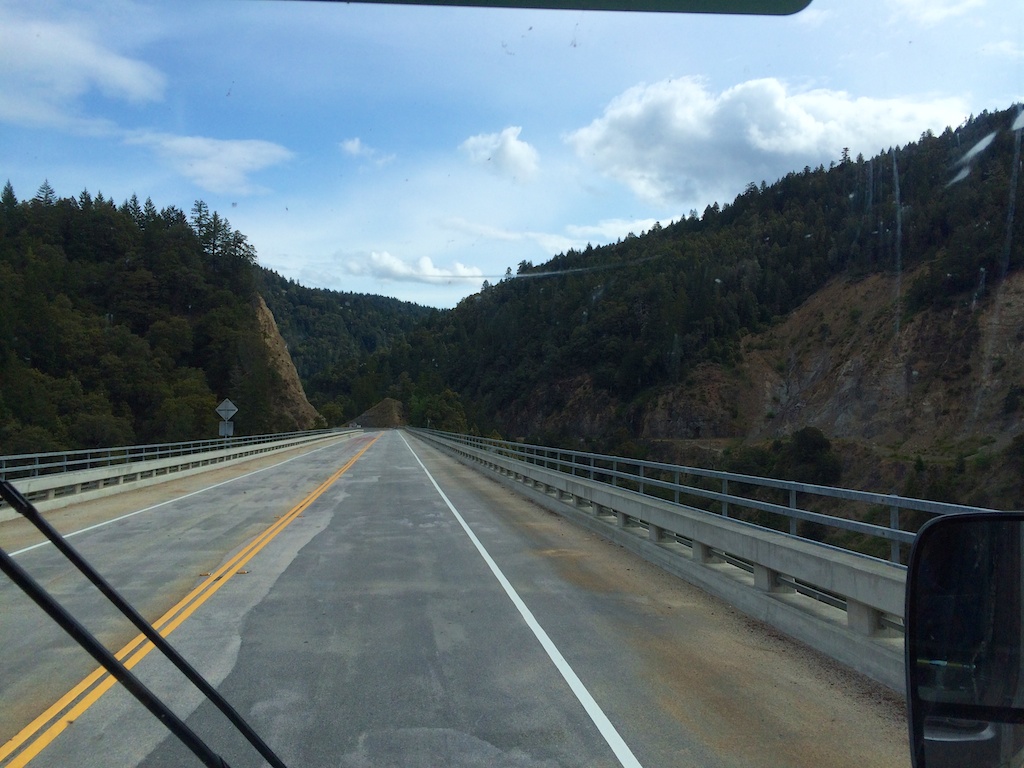 US-101, somewhere in northwestern California